Get CDL Recruiting News Every Month

Availability of Medium-Duty E-Trucks Is Limited as Testing Continues

Battery-electric medium-duty trucks may have a bright future due to their potential to reduce operational costs and improve sustainability. But currently, the availability of these trucks is limited as testing continues.

UPS Inc. would like to purchase more electric vehicles, said Scott Phillippi, senior director of maintenance and engineering, but sufficient production units are not available. In fact, he had just left a meeting with a manufacturer before an interview with Transport Topics.

“Waiting for electric vehicles is like seeing the sign at the bar that says, ‘Free beer tomorrow,’ ” he said. “I know it’s not easy, but we’re waiting again for something to hit the market that really sets the tone and the benchmark of what ‘good’ is going to look like.” 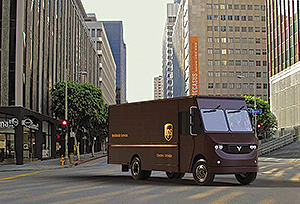 Shown is an artist’s rendering. UPS is collaborating with Xos to develop an electric Class 6 delivery truck in Los Angeles. (UPS)

UPS has about 371 electric trucks, most of them medium-duty, in its worldwide fleet, Phillippi said. UPS ranks No. 1 on the Transport Topics Top 100 list of the largest for-hire carriers in North America.

Last October, the North American Council for Freight Efficiency issued a report concluding that electric trucks are a viable alternative for Classes 3-6 trucks in urban settings with freight hauls of less than 100 miles. Another study, by UPS and GreenBiz Group, found that electric medium-duties could be deployed for the same cost as diesel vehicles.

In an interview this month with Transport Topics, NACFE Executive Director Mike Roeth said electrification is a better fit for medium-duty trucks than heavy-duty. Intracity trucks can charge easily during overnight dwell times, have dedicated routes and stay close to home near maintenance professionals.

Roeth said electric trucks’ upfront cost is not as big of an increase over diesel trucks as many might expect because the battery for a 75-miles-a-day truck isn’t that large. Also, electric trucks can be designed more creatively for entrance and egress.

“A year from now, we’ll be able to talk more specifically about the results of some of these electric trucks,” he said. “This is not a fad. It’s not going away. It’s really happening.”

Lauren has six years of experience working in the transportation industry, specializing in driver recruitment and social media.

Electric Big-Rigs To Be Tested On Freeways

Electric Big-Rigs To Be Tested On Freeways

CDL Recruiting News brings news and information about truck driver recruiting to top managers and Class A CDL holders all over America.